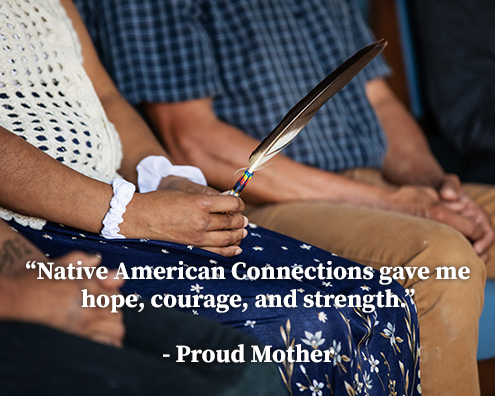 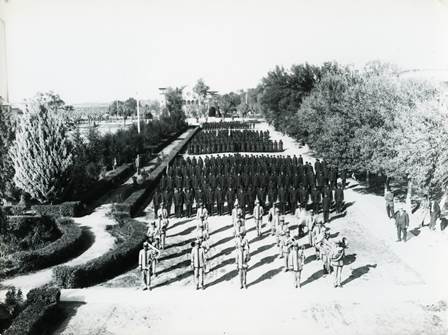 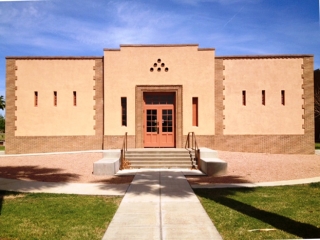 The top photo shows students at Phoenix Indian School line up with marching band members in the front. Photo estimated to be taken in the early 20th Century, between 1900-1930. Courtesy of Billie Jane Baguley Library and Archives, Heard Museum, Phoenix. The bottom photo shows the renovated, historical building in the 2010s.

The History and Evolution of the Phoenix Indian School Visitor Center

The Phoenix Indian Industrial School was established in 1891, operating as a boarding school for American Indian children by the Bureau of Indian Affairs up until 1990. Across its 99 years of operation, the mission of the school was to educate thousands of Native American children, though we know in its early operation, much of their education involved cutting of cultural ties and forced assimilation to a military lifestyle. In fact, Indian Commissioner Thomas Morgan speaking at the establishment of the school in 1891 said, "it's cheaper to educate Indians than to kill them." (Lindauer, 1998). Though Native American students experienced difficult situations throughout the school's history, many students had success here and have become pillars and leaders in our community today. The elementary building, which was completed and opened in the early 1930’s, later converted into a music building during the school's transition; this is where the famous Phoenix Indian School band rehearsed. The band played at many historic occasions in the community, including Arizona’s Statehood celebration in February 14th, 1912.

Located at the corner of Central Avenue and Indian School Road, much of this site was transferred to the City of Phoenix from the Bureau of Indian Affairs in 1990, which the city used to create Steele Indian School Park. Since its closing, the COP saved three historic buildings and placed them on the National Register of Historic Places. One of those historic buildings, the former grammar school building, is the building Native American Connections and Phoenix Indian Center (PIC) have renovated, and have transformed it into the Phoenix Indian School Visitor Center (PISVC).

Native American Connections and partners signed a Letter of Understanding with the City of Phoenix to operate the Phoenix Indian School Visitor Center. We appreciate LISC Phoenix for recognizing the historic significance of and investing in this historic project and building.

More on the Historic Building

The story emerging of the 215 Indigenous children found buried at Kamloops Indian Residential School is hard hitting. U.S. Federal boarding schools were created under the motto of “Kill the Indian and save the Man”. Many of these U.S. federal boarding schools had cemeteries however, Phoenix Indian does not have a recorded cemetery. We look forward to the day that we are able to tell the story of the children that may have perished on the grounds of the Phoenix Indian School.

We pray the little ones that were found can now complete their journey.

We need your help in preserving the rich history of this historic building and important place in our community! You can make monetary donations and donate us any collectibles that relate to the PISVC building for the gallery here.

Schedule an appointment to visit the PISVC and its gallery! Call 602-648-9713 or email PIVisitorCenter@nativeconnections.org to set up your next visit.

You can also support the Visitors Center by renting space for special events. With conference space that can accommodate 120 people, classroom (accommodate up to 25 people), and a commercial kitchen available for rent by licensed chefs, this historic building can be rented to promote healthy living, economic and workforce development, and cultural events. The PISVC building's kitchen can also be used for teaching nutrition courses featuring indigenous foods to promote health and wellness in the Native American community. Individuals and community groups can rent this building space.

We also wish to identify and interview former students and employees of Phoenix Indian High School. If you attended the school or know of someone who did, please contact us: 602-648-9713 or email PIVisitorCenter@nativeconnections.org.

Check out our calendar for events and dates available for educational tours or event space rentals. Call or email to get in touch with our team to schedule your next event or visit.